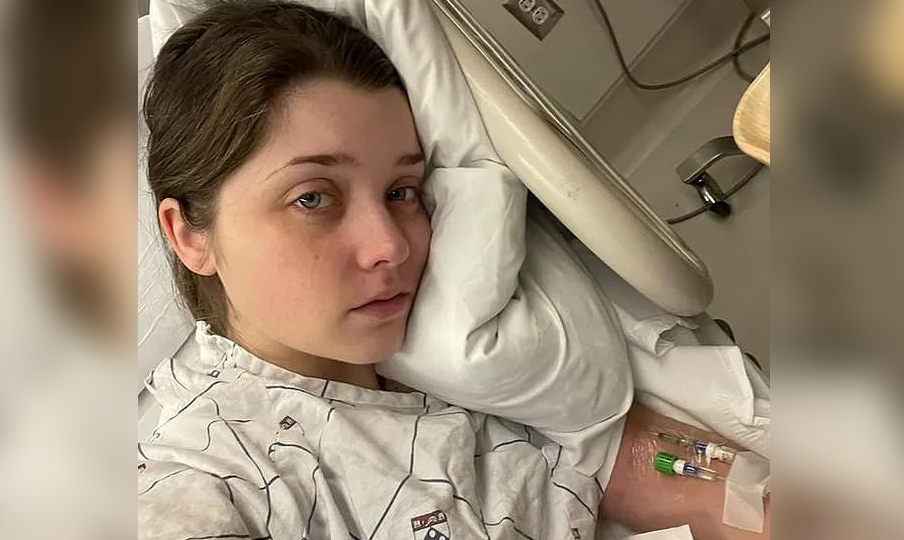 The 25-year-old mother claims that doctors told her that her severe back pain was caused by bad posture while she was working from home. Unfortunately, the young woman was diagnosed with a rare, five and a half-inch giant cell tumor at the base of her spine. When her symptoms worsened, she went to see a doctor. The doctor reportedly told the mother of two to buy a support pillow for her chair and take painkillers. The young mom claims that doctors told her that her back pain was likely caused by sitting badly at her desk.

The 25-year-old mom from Pennsylvania, Ellie Chandler, told Daily Mail that she first developed back pain after giving birth to her twins, Brooke and Parker Chandler.

Chandler said that when her symptoms worsened, she went to see a doctor. Actually, the woman went to the doctor several times in October 2021 as the pain increased rapidly. The doctor reportedly told the mother of two to buy a support pillow for her chair and take painkillers. The 25-year-old mother claims that doctors told her that her back pain was likely caused by sitting badly at her desk.

Ellie went to see multiple different professionals, and even received a clear X-ray. Unfortunately, the woman says that the tumor in her spine grew so big that it started to effect her ability to use the bathroom. But, she says the doctors dismissed her symptoms and told her she probably had an overactive bladder or intestine problems.

Luckily, the young mother went to see her gynecologists who finally discovered the tumor after performing an exam and felt the huge mass. After running more tests, the mom was eventually diagnosed with a rare, five and a half-inch giant cell tumor at the base of her spine, the Sun reports.

Doctors told her that the tumor, which is non-cancerous, was the size of a baby’s head. The mom is now receiving monthly injections in an attempt to shrink the tumor and is preparing to undergo surgery to try to remove it.

Ellie also said that the procedure is going to be very risky and complex due to the location of the tumor. The 25-year-old mom is now urging others who suffer from back pain to take it seriously.

The 25-year-old mom from Pennsylvania, Ellie Chandler, reportedly said: “It went from what I thought was normal back pain from giving birth, then what I thought was caused by working from home and poor posture, to just excruciating pain. My back pain really started in December 2019 when I gave birth to twins. It never really got better – it got worse – but of course we had the pandemic and I started working from home.

I figured I wasn’t set up the best way at home and had bad posture. I let it get pretty bad because life is busy and I had twins. I was working full time and my partner travels for work. I had an annual physical with my primary care doctor [around October 2021] and mentioned it. She told me to go ahead and get a special pillow to sit on while I was working and take some Ibuprofen. I did that but it just kept getting worse at a rapid rate.”

The young mom also said that her condition deteriorated after she suffered from a fall. Ellie believes the fall shifted an area of the tumor. But, the doctors told her that she had likely suffered a fracture, but when an X-ray came back clear, she was given pain medication and sent home.

The 25-year-old mom told Daily Mail: “It became excruciating pain. But when I went to the doctor then, they said, “Oh, if you had a fall it’s probably a fracture or a bruised tailbone. They did an X-ray and couldn’t really get a good image. Now, looking back, soft tissue tumors don’t show up on an X-ray.

They gave me more pain medication and told me to come back in a couple of weeks. I came back four weeks later and it still hadn’t improved at all. In that time, I started having bowel and bladder symptoms. I had gone the weekend of Thanksgiving to another urgent care as I thought I had a UTI. That all came back negative and they said I might have an overactive bladder.

I thought I might have some kind of bladder thing going on and I started having constipation issues because the tumor was obstructing my rectum. Then I was told I might have IBS. By the time I went back to the orthopedic doctor, they did another X-ray and said, “your tailbone looks crushed so it’s definitely broken, but it should resolve. I brought up my bowel and bladder symptoms. They had a chuckle and said it’s probably IBS.”

After an ultrasound and CT scan, Ellie was diagnosed with the tumor. The measurements were all between 10 centimeters and 14 centimeters when they found it, she said. Now, the 25-year-old mom hopes to shrink the large mass. Her tumor shrank about two centimeters after her 90-day trial of it.

Unfortunately, Ellie is unable to work due to her condition and feels extremely frustrated that professionals missed the tumor so early on. The young woman wants to warn other people that back pain is really not normal and hopes that sharing her story will help others.

Ellie Chandler told Daily Mail: “I really went through, and I’m still going through, the different stages of grief. I was really angry at first and scared. After that, I was really angry that I went to so many different doctors and nobody caught this. I did bring up red flag symptoms. Back pain shouldn’t really be considered normal for young people, but it generally is.

Once I brought up neurological symptoms like bowel and bladder issues, they should have been red flags to the orthopedic doctor that I saw. I’m so glad I went for that check up with my OB-GYN because she was ultimately the one who found it. My OB-GYN is a young female doctor and I don’t know if that had any play into it, if she was more willing to listen to my pain and the seriousness of it all.

I was definitely angry realizing I’d been to so many doctors and nobody caught it because over that span of weeks, the tumor did grow significantly to the point where I was having intermittent issues with going to the bathroom. Back pain is so normalized, especially with people working from home these days, but it’s really not normal and you should take it seriously if it’s impacting your daily life. Don’t let it get to the point that it’s so bad you are having issues functioning.”