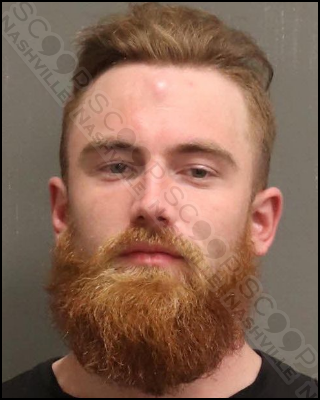 26-year-old Ryan Creamer, of Pennsylvania, was kicked out of Second Fiddle at 420 Broadway has police encountered him on the sidewalk. He was heavily intoxicated and had been causing a disturbance inside the venue. As police attempted to assist him, they noticed he was carrying a handgun in his waistband while intoxicated. He was taken into custody and transported to booking.

Ryan Algernon Creamer was booked into the Metro Nashville Jail on April 24th, charged with public intoxication and possession of a handgun while under the influence. A commissioner set his bond at $3,000 and he was given pre-trial release to his 5067 Hill Road address in Mohnton, PA.