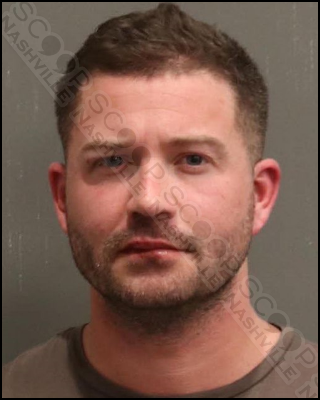 29-year-old Taylor Davis Schiel crashed his Audi in the middle of West End Avenue and exited the car before police arrived. As police were investigating the scene they noticed a nearby vehicle and spoke with one of the occupants, who told police he just stopped and wanted to make sure everyone was OK. Upon further questioning, he admitted his backseat passenger was actually the driver who fled the Audi, Taylor Schiel. Schiel was seen concealing multiple bottles of liquor, some of which were located in the Audi, including a half-empty bottle of Evan Williams. He was clearly intoxicated and reeked of alcohol, but told officer had had not consumed any alcohol. He was transported to booking and charged with DUI.

Taylor Davis Schiel was booked into the Metro Nashville Jail on April 1st, charged with driving under the influence (DUI), and violation of the implied consent law. A commissioner set his bond at $3,500 and he was given pre-trial release to his 3111 Long Blvd address in Nashville.