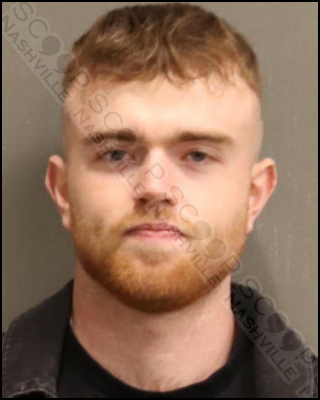 Police say 21-year-old Tadg McEvoy entered the Home2 Suites by Hilton Nashville Bellevue around 4 a.m. and tried to get into multiple rooms before eventually just giving up and passing out in a hallway a drunken state. Police found him next to a random room door and called medics to assist, however, he refused any transport or treatment. McEvoy was described as extremely intoxicated, unsteady on his feet, and continued to try to use his driver’s license as a room key. Officers attempted to contact his friends to retrieve him, but there was no answer, so he was transported to booking and charged with public intoxication.

Tadg McEvoy was booked into the Metro Nashville Jail on April 17th. A commissioner set his bond at $10.