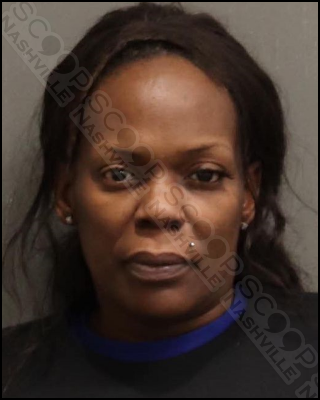 Crystal Hayden says her cousin, 42-year-old John Edward Motley, and his girlfriend, 43-year-old Star Reedy, have been harassing her since November. She provided police with multiple texts, screenshots, call logs, and posts where they posted her address and house on social media, including telling people it was for rent and providing massage services, and giving Hayden’s contact information on multiple versions of the post. Hayden also says she was placed in fear of being assaulted after Star told her the “streets are going to handle you”, and sent assault threats via text messages. Motley also reportedly made threats to have the streets take care of her. Reedy is charged with assault and harassment, and Motley is charged with domestic assault/fear of bodily injury.

Star Reedy was booked into the Metro Nashville Jail on April 2nd, charged with assault and harassment. She is free on a $3,000 bond to her 149 Brookside Road address in Goodlettsville.

42-year-old John Edward Motley was booked into the Metro Nashville Jail on April 2nd, charged with domestic assault/fear of bodily injury. He is free on a $1,000 bond to his 149 Brookside Road address in Goodlettsville.