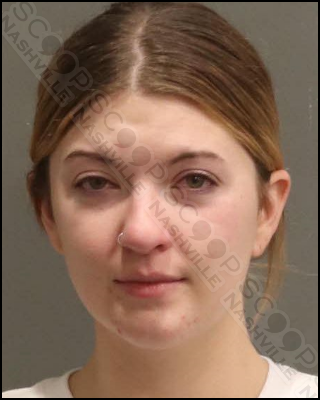 27-year-old Jordan Rafferty blew a 0.183% BAC on a breathalyzer when police eventually tracked her down and knocked on her door after she crashed her silver Mazda sedan into a flatbed construction vehicle on Murphy Road and fled the scene. Her car sustained “severe front end damage” and was located in the parking lot of her apartment complex with all airbags deployed. She claims someone at the scene told her to drive home and not worry about it. Witnesses at the scene say she fled the scene as quickly as she collided with the truck. Her Instagram story revealed her at a table with drinks at Otto’s Bar just before the hit-and-run. Rafferty admitted to having “a few glasses” of wine.

Jordan N. Rafferty was booked into the Metro Nashville Jail on March 17th, charged with driving under the influence (DUI), leaving the scene of an accident, and failure to file a report. A commissioner set her bond at $5,500. She was given pre-trial release to her 3415 West End Ave address in Nashville.