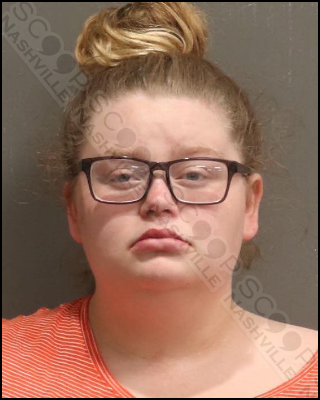 18-year-old Makenzzie Mayberry is charged with the domestic assault of her roommate at the Lotus Inn and Suites, who she says had sex with her fiance. A witness to the events, who is Mayberry’s cousin, tells police they all returned to the motel on April 24 after a day of arguing and fighting about the entanglement. Mayberry then threw a small plastic soda bottle at the victim, Keana Jonson, striking her in the center of the forehead, causing a small laceration. Nashville Fire transported the victim to the hospital and Metro Police took Mayberry into custody for the assault.

Makenzzie T Mayberry was booked into the Metro Nashville Jail on April 24th, charged with domestic assault with bodily injury. She is free on a $2,000 bond to her 3430 Percy Priest Drive address.