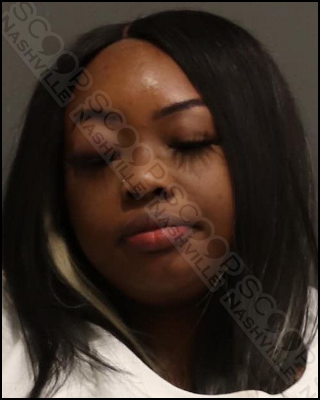 23-year-old Joycelyn Barney told officers she “swerved to avoid an animal in the road” when she crashed her silver Hyundai Elantra in downtown Nashville at 3:30 a.m. Sunday. Officers observed both she and a passenger sustained injuries, and while there were no animals in the area of downtown Nashville, there was a large concrete barricade that she struck. She stated they were coming from Ainsworth, and admitted to consuming “a few” mixed drinks containing tequila prior to driving. Due to her extreme level of intoxication, she was charged with DUI.

Joycelyn W. Barney was booked into the Metro Nashville Jail on March 27th, charged with driving under the influence (DUI). A commissioner set her bond at $2,500 and she was given pre-trial release to her 2071 Oakwood Ave address in Nashville.