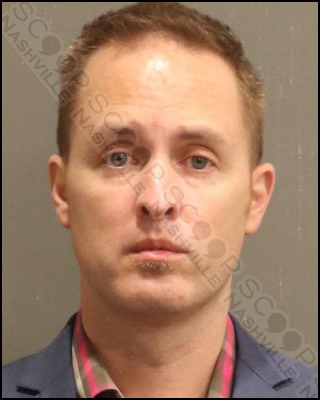 Police say 39-year-old Jason Tolbert became “verbally argumentative” with both officers and hospital staff after a magistrate signed a warrant to have his blood drawn after he was charged with DUI Saturday night. An officer witnessed him fail to yield to another vehicle, nearly causing a crash, and conducted a traffic stop during which Tolbert admitted to drinking whisky, and had a flask with him. He failed field sobriety tests and was transported to booking.

Jason K Tolbert was booked into the Metro Nashville Jail on April 24th, charged with driving under the influence (DUI) and violation of the implied consent law. A commissioner set his bond at $2,000 and he was given pre-trial release to his 5945 Hitching Post Ln address in Nashville.