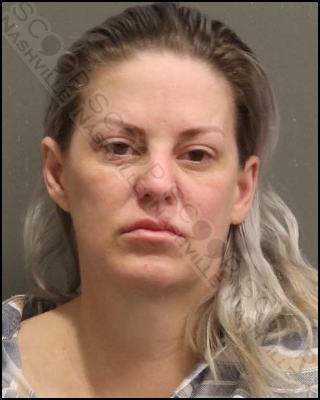 Benjamin Stock says he came to pick up his daughter from the Call Hill Road home of his wife, 39-year-old Janelle Stock. While there he says she began to repeatedly assault him in the face with her hands, leaving him with visible swelling and bruising to his face. Police documented his injuries and spoke to Janelle, who told them there was no physical altercation. Officers observed very visible redness to her hands, consistent with being used to assault her husband. When police handcuffed her inside the residence, she sat on the floor and refused to move, resulting in officers physically carrying the grown woman out of her home and placing her into the patrol car.

Janelle M. Stock was booked into the Metro Nashville Jail on March 22nd, charged with domestic assault with bodily injury and resisting arrest. She is free on a $1,500 bond to her 2601 Call Hill Rd address.