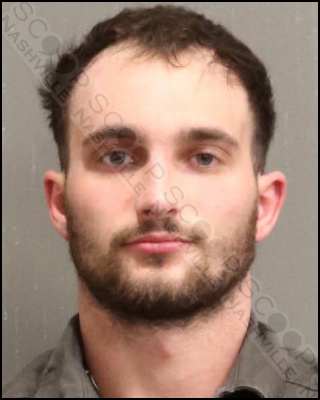 23-year-old Grayson Taylor was kicked out of Zanies Comedy Club after he says he drank a half-bottle of wine and a few additional drinks. Club staff report he was restrained by security after he began screaming racial slurs and causing a disturbance to other patrons. Police arrived to help escort him from the property, and while waiting for an Uber he took off his shirt and became more violent and threatening. He refused to get into the Uber when it arrived, and then threatened officers. After they told him he would be placed under arrest, he requested a supervisor respond to the scene.

While waiting on a supervisor to arrive, Taylor called 911 several more times to demand other officers respond, he then walked to another business where he also became a disturbance. They then warned him a few more times to “remain calm” which he refused to do. At some point they took eventually him into custody, charging him with public intoxication and disorderly conduct.

Grayson Taylor was booked into the Metro Nashville Jail on April 6th, charged with public intoxication and disorderly conduct. A commissioner set his bond at $600 and he was given pre-trial release to his 2478 Cairo Bend Road address in Lebanon, TN.