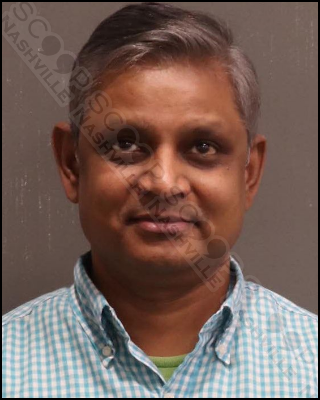 52-year-old Gopathy Purushothaman is charged with the domestic assault of his ex-wife, Shrimalini Jayaramaraja. A custody arrangement states Purushothaman isn’t allowed inside his ex-wife’s home during the change of their 14-year-old son, who has Autism and must wait outside in the car for the child to be brought outside. Last week, Gopathy reportedly came knocking on the front door, then pushed the door open, knocking the victim to the ground, and stepping over her as she fell onto the floor. Police documented bruising on the victim and took out a warrant for his arrest.

Gopathy Purushothaman was booked into the Metro Nashville Jail on April 20th, charged with domestic assault with bodily injury. He is free on a $1,000 cash bond to his 1716 Glen Echo Road address in Nashville.