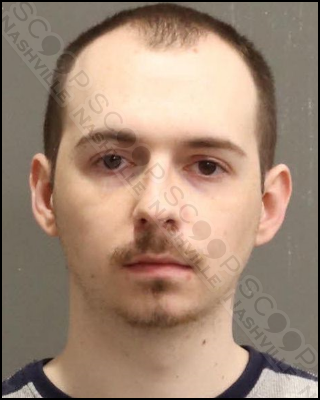 24-year-old David Blake Corman told police he drank “two margaritas” prior to crashing his vehicle at the intersection of Pettus Road and Preston Road in South Nashville at 2:52 a.m. Tuesday. Corman told responding officers he took the curve too fast and ran off the roadway, however as he was speaking the officer could smell alcohol coming from his breath. Corman performed poorly on field sobriety tests and blew a 0.135% BAC on a breathalyzer. A commissioner set his bond at $5,000, and he was then given pre-trial release. Corman told Scoop: Nashville he had been out “celebrating” with a friend overnight.

David Blake Corman was booked into the Metro Nashville Jail on April 5th at 5:32 a.m., charged with driving under the influence (DUI). A commissioner set his bond at $5,000 and he was given pre-trial release to his 2229 Arbor Pointe Way address in Hermitage.